Please visit our Facebook group or TidyHQ page for the most current information
on how we're making class safe for our students.

"You should learn that there is nothing about the sword that has been invented for without reason and that a fencer should make use of the point,
of both edges, the hilt and the pommel. Each of these has its own special methods in the art of fencing."

We are Maryland Kunst des Fechtens - a group  dedicated to learning
the martial arts of medieval and Renaissance Germany.

Members of our club primarily learn the art of the longsword based on the teachings of Johannes Liechtenauer
from selected sources, but may also delve into sword and buckler, spear and polearms, messer,
dagger and wrestling, or more esoteric weapons.

We also organize visits to other regional groups and make an effort to remain involved in the wider
Historical European Martial Arts (HEMA) community.

Based on extant source material, our focus is on historical techniques found in fighting treatises and books.
Created across hundreds of years, these fechtbucher (fight-books) specifically present systems of combat that demonstrate
an efficient and deadly form of fencing.

Kunst des Fechtens, the Art of Fighting, is used to refer to the martial arts that developed in the
medieval Germanic regions. Each member of our club has opted in to a joint vision of what early Germanic martial arts may have
looked like, the type of training required to achieve proficiency, and what the future community of KDF practitioners should look like.

The fighting in Medieval Europe was not a collection of brutes swinging heavy, sharp clubs. It was elegant
with a deep understanding of the weapon and its geometry. This is NOT television fighting.

A longsword does not weigh 10 pounds. Nor even 5 pounds, in most cases. The average longsword,
our primary weapon, weighs between 3 and 4 pounds. They are well balanced and effective. Fighting integrates
distance management, leverage, timing, oppositional strength and weakness, and speed.

Longswords were sharp. They were not dull clubs of steel that knights battered each other with. Swords
were razor sharp which allowed the user to exert the minimal amount of force
necessary to incapacitate someone.

Written across centuries and preserved by private collectors or public institutions, hundreds of works on
fencing from the 14th to the 18th century have survived. They were produced by fencing masters,
members of fencing brotherhoods, and compilers of combat arts in multiple cultures and languages.
The name Johannes Liechtenauer is cited often as one of the key masters upon which later Germanic traditionsbuilt.

Liechtenauer passed down a zettel, a mnemonic verse, to his students. Within this verse
was described seventeen chief techniques that all followers of his tradition should learn. His zettel covers
guards, strikes, mechanical concepts, and fencing theory. The followers of Liechtenauer wrote explanations
of each verse, including descriptions of actions meant to demonstrate the concept. This is what we work from. 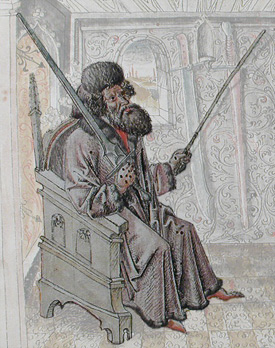